RESEARCH: Method to the Madness of March

Tomorrow is the day we’ve been waiting for. Tulsa is currently tied with Michigan with 17:00 remaining to play. I have no dog in this fight (nor does my mother, the President at Davidson), and yet here we are screaming at the TV arguing about these teams, their conferences, and the NCAA in general. I am invested and it’s only the first four. March Madness gives sports fanatics (like myself) an opportunity to care, REALLY care, about teams like Northern Iowa, but it also gives math enthusiasts (not to say that he/she is not also a sports fanatic… guilty, again) a chance apply concepts, algorithms, and models to an entirely new domain.

HERE IS WHAT WE ARE GOING TO DO TO EASE SOME OF THE PRESSURE KILLING YOU RIGHT NOW – PICK THE UPSETS IN EACH ROUND BEFORE THE ROUND BEGINS (and maybe, just maybe, if you are nice to us (retweet, mention, link to us) share with you our BRACKET).

Tresata’s Chief Research Officer, Dr. Tim Chartier, is known for applying his mathematical expertise to the Madness (or ‘Mathness’, as he calls it) of March. In our previous blog, we debuted our first round of “Tresata Tourney Tips.” With tournament play approximately 12 hours away it is time to finalize your last, and hopefully best, bracket. As a Tar Heel alum, basketball will always be more than numbers, data, seeds, calls, RPI, efficiency, inconsistency, or size. It is also the tension, the adrenaline, the passion and the excitement of the whole event.  However, as Basketball Christmas Morning approaches (and yes, I already got what I wanted … #1 seed!),  the 14 years (2002 to 2015) of carefully curated and investigated data we have spent hours querying with Tresata’s OPTIMUS is the only thing lowering my blood pressure.

Bracketology is religion; you have to feel it for yourself. As we present our predictions for the following first round upset teams remember, HERE IS SOME ADVICE – above all else don’t lose your LOYALTY to your school…and trust your gut.  Also, these predictions are for fun and not dogmatic (hence the ‘Madness,’ people).

Coming off an overtime loss to #1-seed Oregon for the Pac-12 title means Arizona is desperate for the W. In the same vein, Wichita St. just shut out the Commodores (Vanderbilt) for a spot in the tournament. Momentum is hot both ways.

Based on our Tresata Tourney Tips (t3 for short), consider this:

Overall: Almost equal to the 12 seeds, 11 seeds have won 35% of the matchups in the last 31 tournaments… Arizona has the strength of schedule, but does Wichita have the defense to dominate?

Our Pick: The momentum of the underdog will carry Wichita State.

The VCU Rams may play dirty, but there is no denying their talent (Mo Alie-Cox anyone?). Oregon State, however, has faced and defeated Oregon (1), Utah (3), and Cal (4).

Per our Tresata Tourney Tips look at VCU’s out of/in-conference play:

Our pick: The ‘Havoc’ of the VCU Rams will win out.

The game of the “roller coasters.” Both Wisconsin and Pittsburgh have had devastating losses and thrilling wins this year. Will we see the Pitt that led Duke (5) to a 14 point loss? Will we see the Wisconsin that only scored 48 points against Oklahoma?

As mentioned in the Tresata Tourney Tips, consider both team’s losses:

Our pick: The struggling, but resilient Pittsburgh Panthers.

The Zag’s are looking to make their 15th first-round tournament win out of (now) 18 appearances. Not to mention they are fresh off a win over St. Mary’s number 1 offense. Seton Hall, despite its youth, has proven to be a competitor after winning the Big East (over Villanova (2).

Our pick: Between these two underrated teams, we have to go with the veteran. Go Zags!

And yes, come Round 2, we will keep making predictions that may invite the wrath of some, but ease the pain for others…

As they say – if you are not first …you’re last… 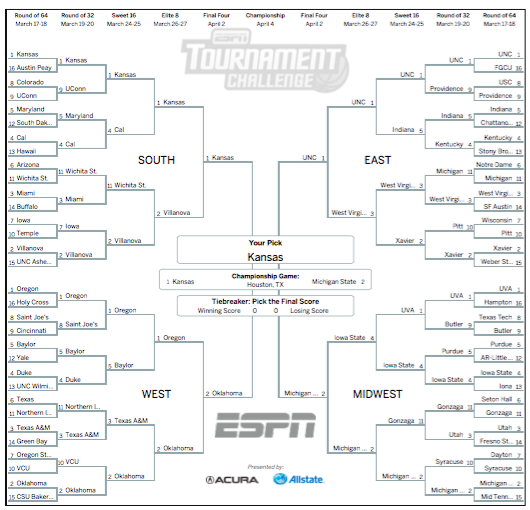