That’s what 255 registered hackers from all over the country set out to do this year at HACKATHONclt MMXVI.  The 4th annual overnight coding faceoff took place for the second year in a row at UNC Charlotte’s PORTAL building Friday March 18th to Saturday March 19th, 2016.  If you missed it, you’ve made a huge mistake…only joking, there’s always next year. 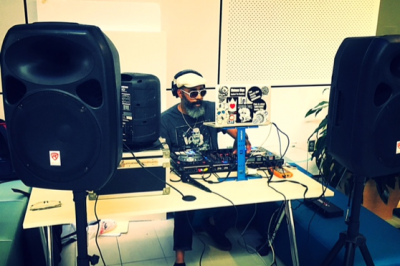 HACKATHONclt MMXVI kicked off Friday night with its usual, outrageous celebration of participants, event sponsors, and the wider Charlotte tech community—amassing a crowd that was upwards of 400 attendees.  Local DJ, DJ Smitty, set the tone for the crowd as they got their fill (and then some…it was free, after all) of delicious heavy hors deurves, drinks, and the annual #HACKATHONclt cake—and geared up to compete for massive cash prizes over the course of the next 24 hours. 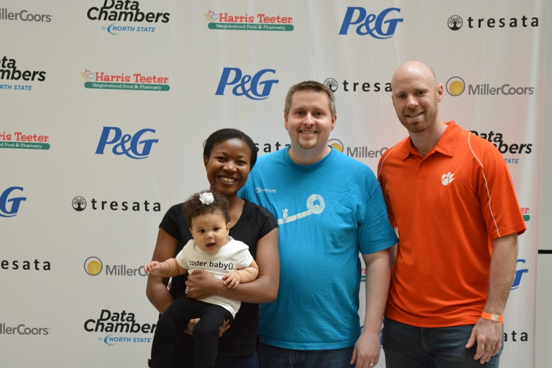 Spectators of all ages turned out for the kickoff party to wish participants luck, including Team Preggers’s (last year’s HACK category winners) precious now-1-year old whose officially been deemed “the Hackathon Baby,” sporting a ‘coder baby’ onesie with “you forgot a semicolon” on the back.

This year, hackers were distributed throughout the building in designated “hacker spaces” that were primarily empty office spaces (BIG thank you to UNCC and Jim Currie for letting us do this).  Think of a “hacker space” as a working surface and a few chairs for each team.  This layout was intended to allow for team collaboration and diminish the feeling of claustrophobia (as much as possible, anyway).  Also, since participants were in it for the long haul, we wanted to make sure they were comfortable.  The hackers themselves were instructed to bring their own laptops, monitors, and whatever they needed to bunker down for the night. 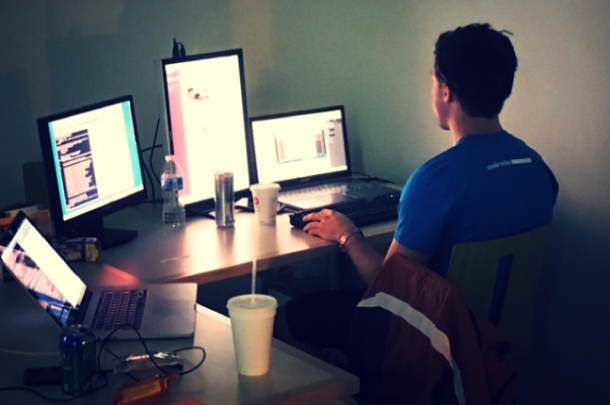 In the main space, founding sponsors set up lounges for organizers, help desk volunteers, and those truly comfortable with background noise (as we tend to get a little rowdy) or interested in watching some March Madness while they worked. This year’s sponsors included the usual suspects: Harris Teeter, Tresata, Data Chambers, MillerCoors, and P&G, plus some additional new faces: KForce, CTS, University City Partners, Cabot Cheddar, and Oak Ridge Staffing.  There was a theme for sponsor lounges this year- thus each was assigned a decade: Harris Teeter- ‘90s, Tresata- ‘80s, and Data Chambers- ‘70s (although technically I think they were assigned the ‘00s…we won’t hold that against them though since their booth and costumes were amazing).  Traditionally, participants vote on their favorite sponsor lounge, but since I am biased (and the one writing the blog) we will go ahead and say Tresata won this year.

As is tradition (and in the interest of leveling the playing field), the business problem was announced to all participants at 7:30pm following the kickoff party.  This year’s problem centered on data provided by Second Harvest Food Bank of Metrolina; thus, hackers had focus on social good (versus strictly retail) for the first time in HACKATHONclt history.

To give you some background, Second Harvest Food Bank of Metrolina is a nonprofit regional distributor of food that supplies charitable agencies assisting those in need.  Their goal? End hunger.   Recently, SHFBM announced a substantial expansion (nearly doubling their footprint and warehouse square footage) due to major donations related to their Capital Campaign . 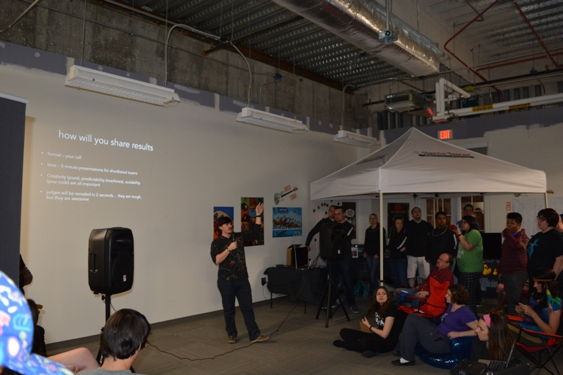 The problem we presented for Hackathon MMXVI was two-fold.

With this expansion, SHFBM was looking to:

There were over 1.6 billion records of (BIG) data, scrubbed and de-identified, for hackers to work with to extract insights and develop their solutions.  On the technology side, an at-scale 5-node Hadoop cluster was provided by Data Chambers and managed by Tresata with a completely open source stack including HDFS | MR | HIVE | SPARK. Participants also had the ability to use Tresata software for the first time, specifically our real-time network graph engine ORION.

At 8:30pm, hackers were cut lose to go off and create innovative solutions that addressed this problem. 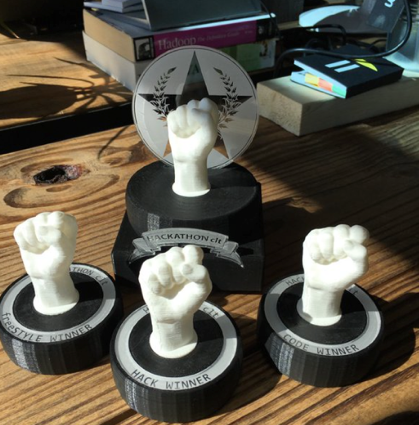 Each year we up the ante with prizes and Hackathon MMXVI was no exception, with over $10,000 up for grabs this year.  Prizes tiers were $5,000, $2,000, and $1,000 for the categories of HACK, CODE, and freeSTYLE, respectively.  Each category winner also received a 3D printed trophy, courtesy of Davidson College’s 3D printing lab and the tireless efforts of Brian Little over there.

In addition to the cash prizes, Cabot Cheddar sponsored a raffle giveaway ski trip for two to Smuggler’s Notch in Vermont.  The prize was a pretty sweet deal- including airfare, accommodations, lift tickets, and meals for 4 days and 3 nights.

We do our best to take care of our hackers throughout the event.  Harris Teeter provides an unbelievable amount of a variety of food and fuel (Red Bull) to keep the energy up for the entirety of the competition.

This year the color for our now ‘collectible’ shirts was a electric blue…yes, there are 4 versions of these super shirts now and yes hackathon aficionados DO collect them. Yet another reason to show up!! 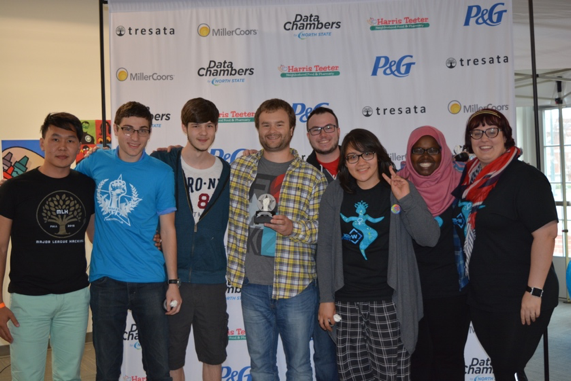 Participants from all over the country – as far West as California, as far North as New Hampshire, as far South as Miami – showed up to compete this year, representing 13 states and 54 cities nationwide. As a founder of the event, we could not be more proud of the 20x growth in participants we’ve seen over these last 4 years.  HACKATHONclt MMXVI aggregated brilliant minds, unique perspectives, and talented students and professionals and seeing what they came up with in such a short amount of time was a truly incredible thing to witness, especially given that the focus was on feeding the hungry.

While we reckon around 70+ teams started, by 10:00am Saturday morning around 35 were left standing (or lying down) for the first round of judging, which narrowed it down to the 10 teams (approximately 3 for each category) chosen to present to the wider group and panel of judges.  Judges for the preliminary round this year included HACKATHONclt Advisory Board members and Organizers.  The final round of judging included Pete Murphy (CIO of Cardinal Innovations), Abhishek Mehta (CEO of Tresata), and Jean Wright (VP of Innovation at Carolinas Healthcare).

Judging was no easy feat this year as there were several brilliant ideas and outstanding approaches to this year’s problem.

HACKATHONclt submissions are divided into 3 categories, depending on approach: 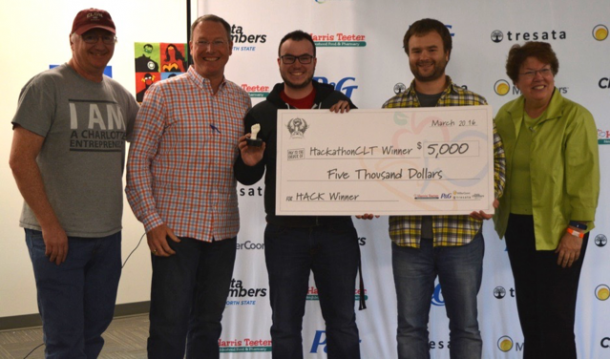 For a HACK submission, participants derive a solution from the data by building a predictive analytics application. HACK requires the most work (hence the biggest prize of the three): a functional solution, tangible predictive insights, and a killer business presentation.  The more data you use (e.g. demonstrate scalability), the more creatively you use it, and, most importantly, the more accurate your results the better your chances of winning will be.

This year’s $5000 HACK prize went to Team No Sleep (Jacob Foard & Kevin Pedde of Red Ventures) for their creation of an application that used machine learning algorithms to find patterns in high donation zip codes to assist in targeting more likely donors. They also pulled in public demographic, census data from the US Census Bureau to supplement and profile donors. 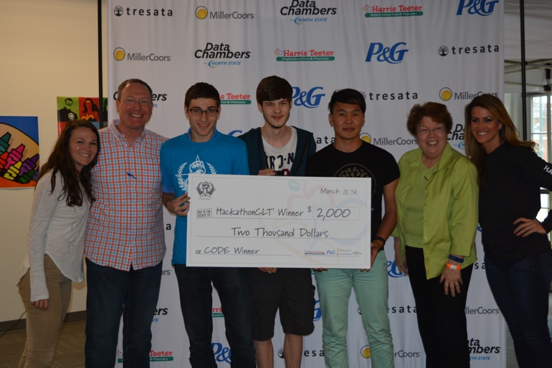 For the CODE category, participants are again asked to create a solution using the data (but this solution does not incorporate any predictive analysis). This can be a mobile app, a game, a website, etc.  The more facets of the problem addressed, the more support (stats) shown to back your solution, the better your chance of winning.

The $2000 CODE prize went to Team One (Jeremy Bohannon, Nicholas Breaton, Itgel Ganbold). They created a logo recognition game that could be sponsored by brands. In exchange for players recognizing their brands successfully, Brands would then donate a certain amount of food to Second Harvest. The more you win in the game, the more food is donated. 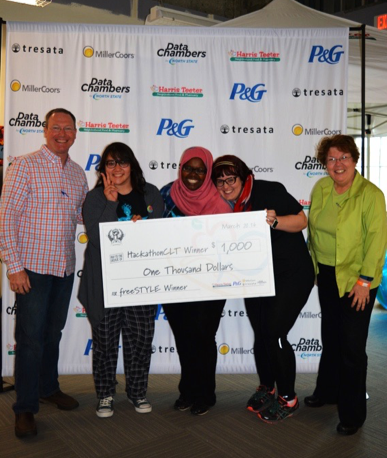 The freeSTYLE category enables non-hackers to participate in HACKATHONclt.  For this category, participants present a unique, compelling, and well-thought out approach the business problem.

The freeSTYLE $1000 prize went to Wonder Women (Rachel Chesley, Ikran Hassan, Maybellin Burgos).  The Wonder Women created a prototype (using MarvelApp) for an algorithm-based web app that had a recommendation engine for distribution center location placement, locations for optimal charity events and marketing opportunities, plus an inventory tracker for resource management.  Their prototype can be viewed here and presentation here. 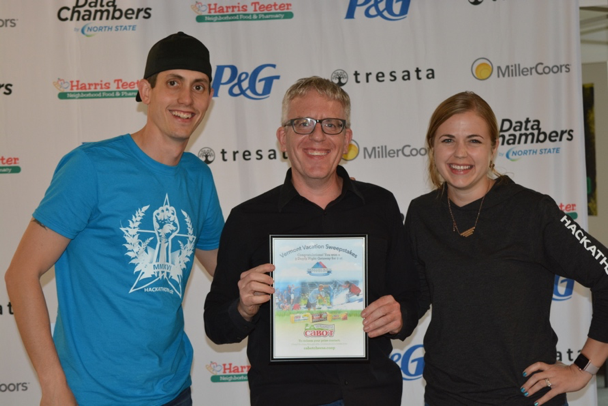 The ski trip to Smuggler’s Notch resort in Vermont sponsored by Cabot Cheddar went to none other than Dave Callahan, a HACKATHONclt veteran. Enjoy the slopes, Dave! We’re hoping to see at least one snowy selfie! 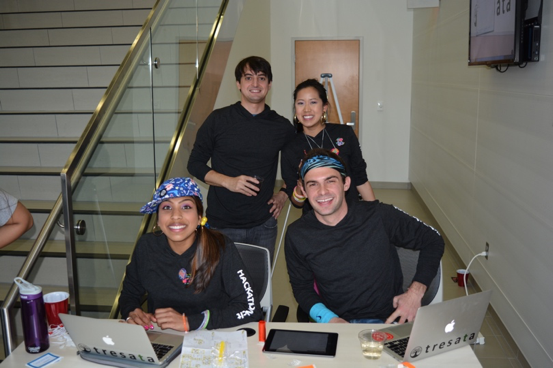 …but why do we do HACKATHONclt?

In case you haven’t been to the (recently revamped & awesome) website, you may be wondering what incentive we have to orchestrate these inspiring, but exhausting coding marathons each year in Charlotte. It’s simple.  Charlotte HAS a really cool tech scene.  PERIOD. And we took it (take it) upon ourselves to showcase to the country (the world) this unbelievable, talented, adrenalin driven group that will do BIG things…just like my company does!

Once a year, this is our way (and my way) of giving back to a city I have called home for 25 years, and Tresata calls its ‘inter-galactic headquarters’. Rallying fellow entrepreneurs, dreamers, sleep deprived thinkers, and just a fun group of people to do something good with this thing called data…even if for one night of ass-kicking work!! 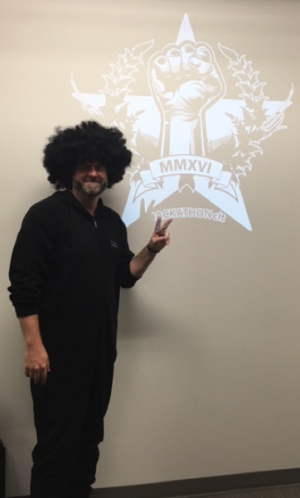 HACKATHONclt planning for next year is already underway, with ambitions to broaden our reach, provide more interesting problems to solve (and more interesting data to hack), recruit more participants, and engage with more members of the Charlotte tech scene (and beyond) who are aligned with our mission.  Keep an eye on www.hackathonclt.org and @charlottehacks on Twitter for updates.